The Ancient Port is born again in Ravenna

The Ancient Port of Classe is an archaeological area located 4 km far from the centre of Ravenna. Here the visitors can have an approximately view of how the streets of the harbour were but also of where the buildings of the harbour (from V-VI century) were situated. In these centuries, the port was at the top of its importance as commercial seaport.

The itinerary tour covers an area of 10.000 mq and proposes places daily frequented by people who worked in the warehouses or people who reached Classe from the harbour. Visitors get totally involevd in the atmosphere of the archaeological site.

Reduced fee valid for all groups guided by our staff: € 4,00 euro per person.

Dante Alighieri Theatre, famous opera house in Ravenna, opens to the public. It was inaugurated on 15th May 1852 and was soon recognized as one of the best equipped theatres in Italy. Its construction was entrusted to the Venetian brothers Tommmaso and Giambattista Meduna, who had already been involved in the restoration of the Fenice Theatre in Venice. Reflecting the style of the Venetian artists the theatre was built in the traditional horseshoe shape with 830 seats in neo-classical style. Many artists and world renowned personalities have performed here: from Gabriele D’Annunzio to Maria Callas to Rajna Kabaivanska.

The theatre has been the crown jewel of Ravenna’s cultural scene for two centuries. Thanks to a dense and varied artistic programme of concerts, ballet, prose, opera and chamber music, it is the third “teatro di tradizione” in Italy. Such recognition is usually given to the theatres that have particularly developed local artistic and musical traditions. Since it was founded, it has been the city’s reference point for high quality performances such as, some of Ravenna Festival‘s summer events. 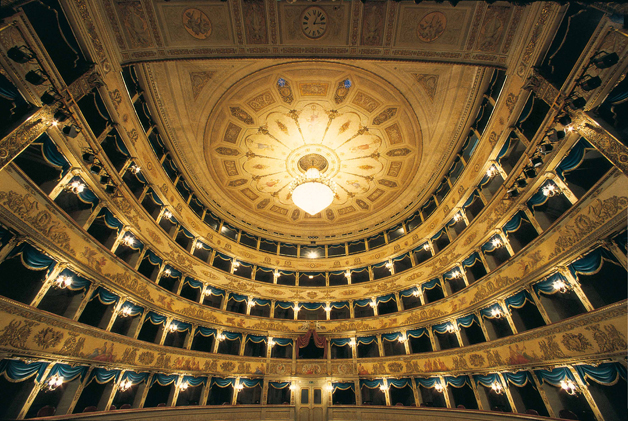