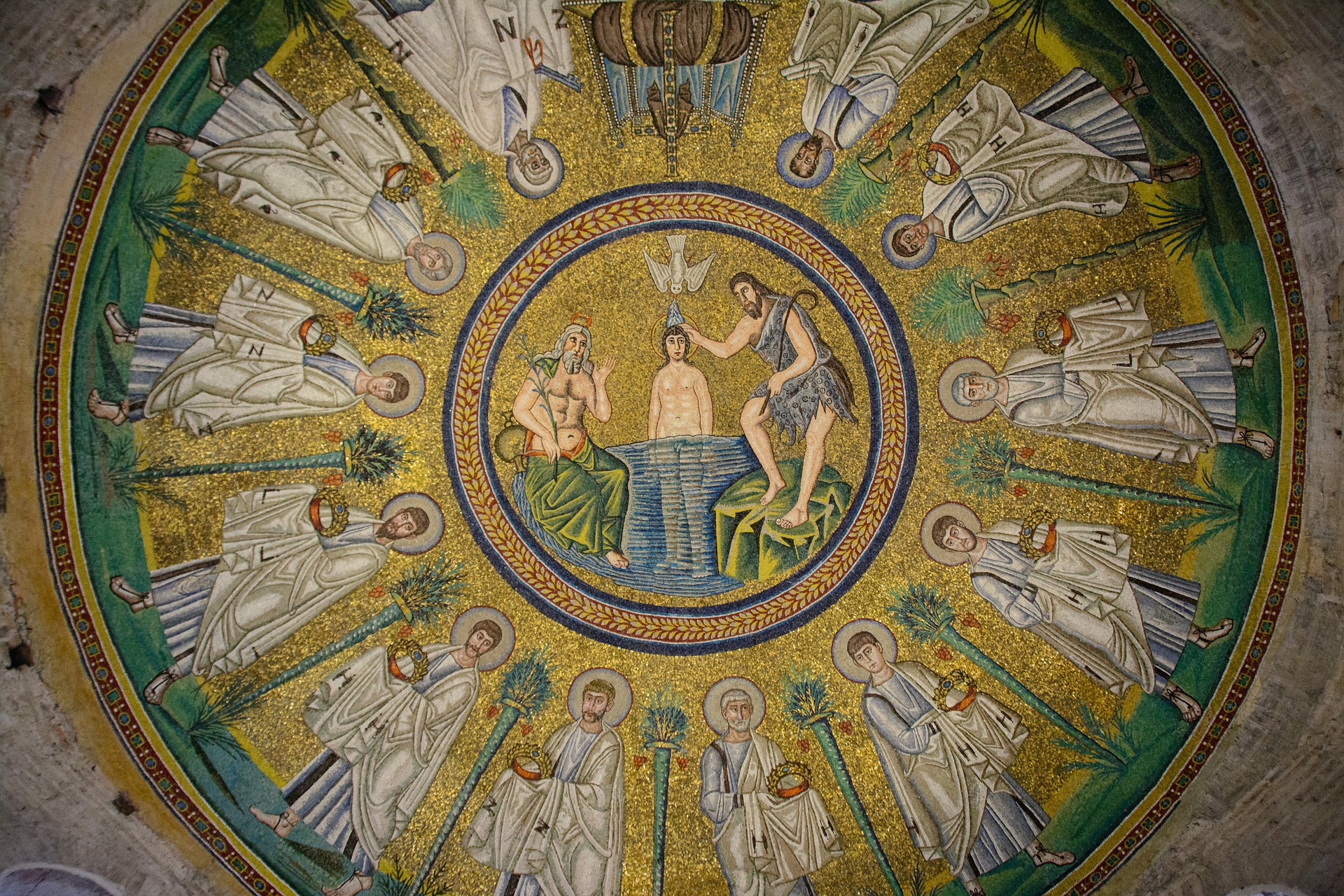 “God is in the mosaics of Ravenna”

Mosaic art is a very old decorative form which developed mainly within the cultural and geographical boundaries of the Greek-Roman world, therefore becoming a major pictorial art form in the Christian and Byzantine Era. Mosaics are made with several tiny little cubes of different shapes, called “tesserae”, which are used to cover a surface previously treated with a binden, a particular kind of glue.

Tesserae can be of different materials: stone, marble, glass, mother of pearl, ceramic. Moreover, they are never perfectly cubic as they are hand cut by mosaicists with special tools such as the hardie and the mosaic hammer.

Tesserae are first set at different angles on the surface in order to create a fascinating play of light of great effect. In fact even with the slightest movement of the observer the tesserae light up and turn off creating quickening reflections that give the impression of something that is alive, pulsating and changeable.

The surfaces covered with mosaic seem to generate such a shining splendor that in a 6-th century mosaic inscription housed in the Archiepiscopal Chapel in Ravenna we read these lines:

Light was either born or captured here, and here reigned freely

In order to decorate the walls and the domes of the early Christian or Byzantine basilicas mosaicists used “tesserae” made of glass which, in comparison to stone and marble, have the advantage to be lighter and brighter. The color is obtained by adding metal oxides to ordinary glass during fusion.

According to the type of oxides used we will obtain a different range of colored tesserae, i.e. cobalt oxide for blue, copper oxide for green and red and manganese oxide for purple.

For golden and silver tesserae another procedure is adopted. In fact for these kinds of tesserae the color is not obtained by using any particular oxides but by sandwiching a very thin metal leaf (of gold or silver) between two layers of transparent glass: one slightly thicker acting as a base, the other used as a protective glass film, commonly called “cartellina”. This is the reason why these tesserae are more precious than the others.

Mosaic art is durable, it is not subjected to corrosion or atmospheric alterations, it always preserves its fresh lively brilliant splendor. For this reason a famous Italian artist of the XV century considered it “la vera pittura per l’eternità” that is to say a real eternal painting.

Characterized by a constant search to experiment new artistic media, Modern Art, in its evolution, has a tendency to look back at the past: it often re-uses old and once widespread techniques neglected today, in order to apply them to the most up-to-date expressions of contemporary art. The same thing can be said of modern mosaic. If we look up the word mosaic in the “Dictionary of painters and paintings” we can read “In the XX century it has regained favor as a decorative three-dimensional style, finding its own place in ornamental architecture”.

We can quote the names of famous artists such as Antoni Gaudì, Gustav Klimt and above all Gino Severini (the “Istituto d’Arte per il Mosaico” in Ravenna is dedicated to him) whose works of art have contributed to the awakening in interest for this art in the XX century.

Today in Ravenna the tradition of mosaic art is still preserved in the several workshops that reproduce the ancient masterpieces of the past following the ancient mosaic technique, as well as translate art by contemporary artists.

The aim of these workshops along with the various Institutes and Art Schools for mosaic art is to satisfy a constant request for high-quality mosaics both on a national as well as international market; in doing so, they want to create a niche product that can guarantee the continuity and the revival of this old handmade art, which is jealously preserved in Ravenna.